•    What is all the fuss about this “108 CODE”! Is it the Pulse, the Rhythm, the Living Curvation, the True Mathematics of Nature? Is it the Essence of that which is repeatable, shareable, tangible and yet timeless, a phenomenal mathematical code that makes the invisible visible?
Such a rare diamond, with never before published material. Such a vast subject, that The Book Of Phi, Volume 3 is only an introduction to the 108 CODE revealed in full detail in the next two books: Volume 4 is on Phi Code 1 (linearly based on the digitally compressed Fibonacci Sequence), and Vol 5 is on Phi Code 2 (the multi-dimensional form based on the cryptic and endlessly cyclic “Powers of Phi” and has a direct correlation with the ancient Medical Symbol known as the winged Cadduceus symbol and currently claimed by big Pharma. The release of these codes to the next generation of children is about reclaiming our Power and Love). 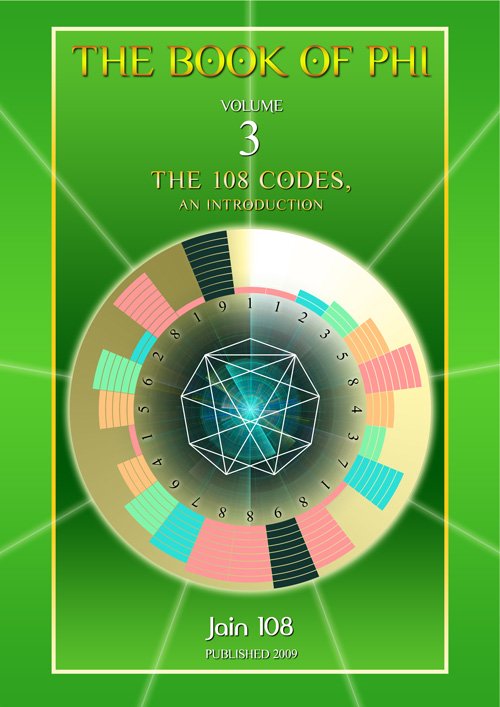 This book contains 216 photocopied pages, is hand-written in parts but mainly computerized, highly illustrated, the book is a golden rectangle but fitted or orientated to A4 landscape , and wire bound.
Self Published in 2009 First Edition
ISBN: 978-0-9757484-2-8 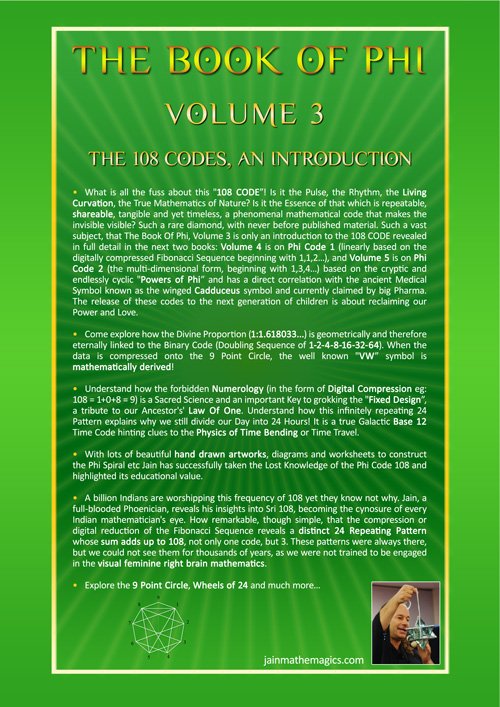 tHE bOOK oF pHI, Volume 3,
subtitled: The 108 Codes, an Introduction.

cHAPTER 3
~ Binary Code Vs Phi Code
Understood as 2 separate codes or sequences but really they are embedded in one another;
– shows an excellent diagram that proves that the Phi Ratio is hidden in the Doubling Sequence or Binary Code.
– Rare Theosophical Charts of the Powers of Two describing the Electromagnetic Spectrum.
– Mathematical Origin of the VW Symbol.

cHAPTER 4
~ How To Construct the Phi Spiral, Worksheet
Applying Meditation and the Art of Manifestation into the step by step worksheets.

~ Numerology as a Sacred Science aka Jain’s Law Of Digital Compression aka Base 10 Homeopathics
An article that glorifies the greatest mathematical tool called “Digital Compression” which reveals all the mysteries, like the 108 Code, merely by adding digits as in 34 = 3+4 = 7. Simple, yet powerful. It clearly can no longer be debunked.

cHAPTER 6
~ Jain 108 Vs Peter Saad
Goes deep into the complexities of a Father-Son Relationship. Part 1 of 2

cHAPTER 7
~ Jain 108 Earthheart In The Court Of Mind
Goes deeper into the complexities of a Father-Son Relationship. Part 2 of 2

~ aPPENDIX
1. The Next 2 Books On Phi: vols 4 and 5
2. Some Enviromental Occurrences of 108 and 1.618… 7 separate incidences are described
3. Earth Earth = EarthHeart Lexigram (poem)
4. Product of the Phibonacci Numbers
5. Cosmic Math Logos 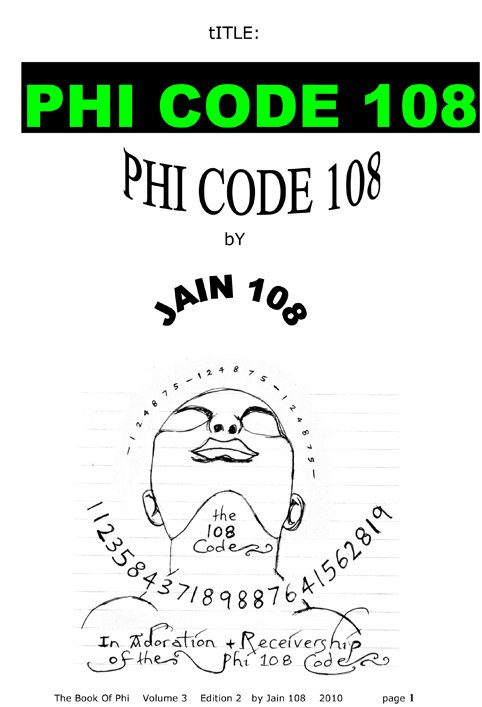 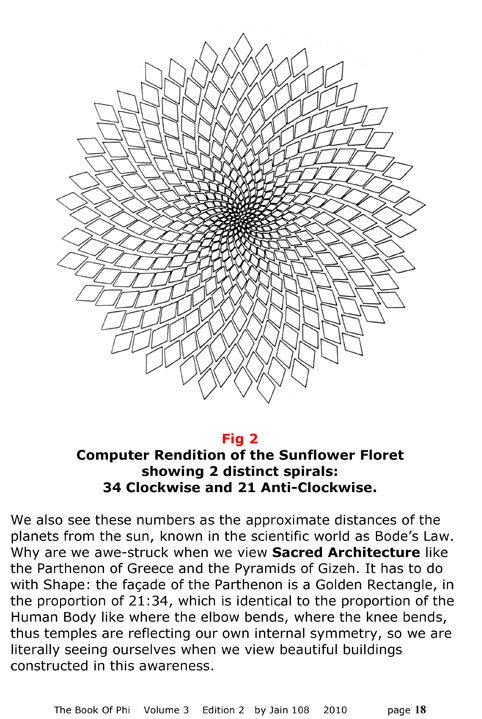 This is the most pysch-oactive diagram I know on the Phi Ratio,

even though it is a computer rendition of the 21:34 coding of the sunflower’s floret, it still captures the essence of non-destructive embedding as a pathway to infinity macro micro toroidal unified field. 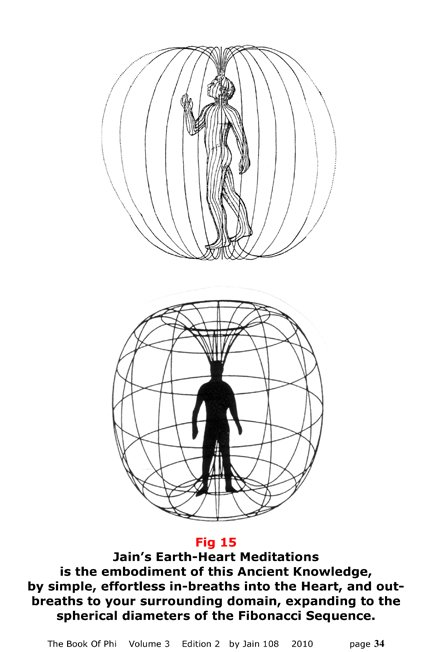 Jain’s EarthHeart Meditations based on the Toroidal Field.
I was doing and teaching this at the time Drunvalo Melchizedek was teaching at the time a dangerous 18 Breath Meditation called The Flower Of Life technique, which he has now banned and warned people not to spin their fields. We are already spinning around the planet, we need to go into the Heart, not the Head spinning path. Avoid anyone doing these Flower Of Life meditations, they end up ripping their fabric of Time and Space and end up often in mental institutions. Warn your friends to never participate in such activities; often the teachers or facilitators do not even know what Sacred Geometry is, and they are merely teaching this as a form of “bread and butter” income. So be very wary. Lots of foxes out there. Sorry to be the bringer of this news, but I feel it is important enough to make this claim, as a spiritual warrior, to just breathe one breath into the heart, that is it. 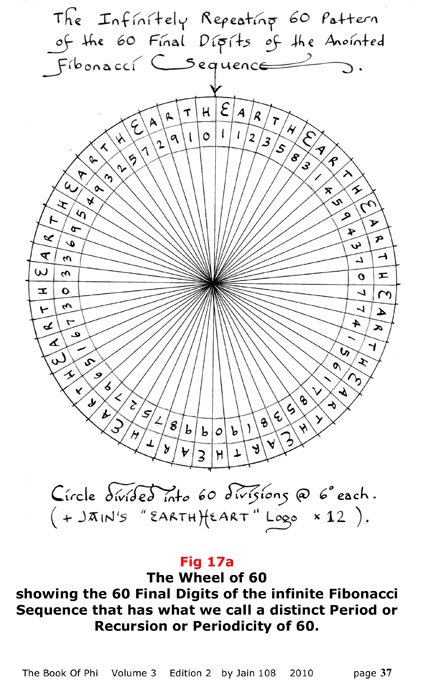 Not only is there a “108” pattern, there is a secret “60” pattern in the fibonacci numbers! 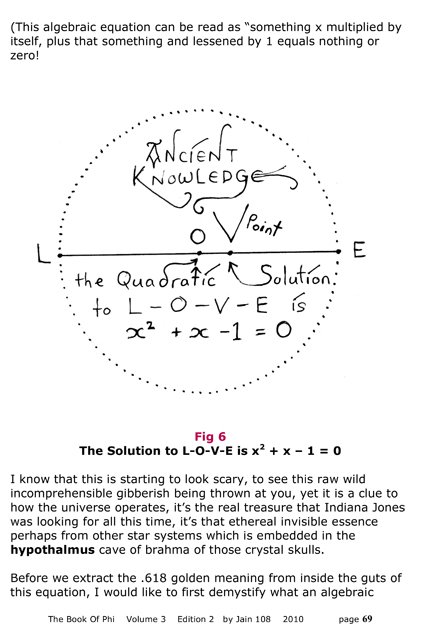 Phi Ratio 1.618033… can be derived Algebraically. To demarcate the proportions or intervals of the Line, I have used the markers of L and O and V and E. 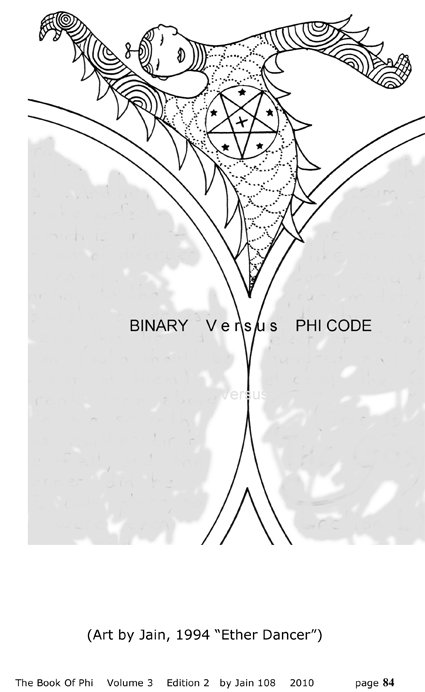 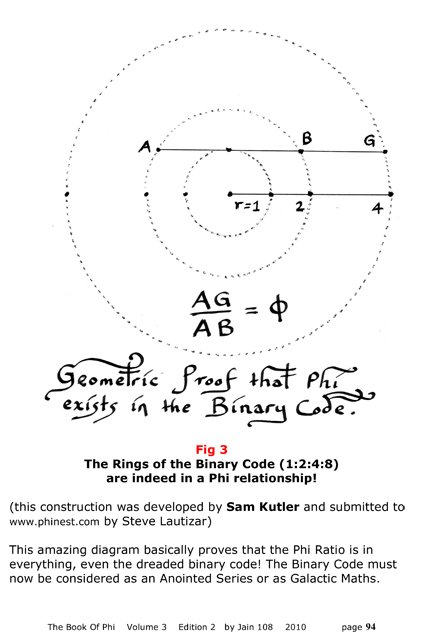 Geometric Proof that Phi exists in the Binary Code 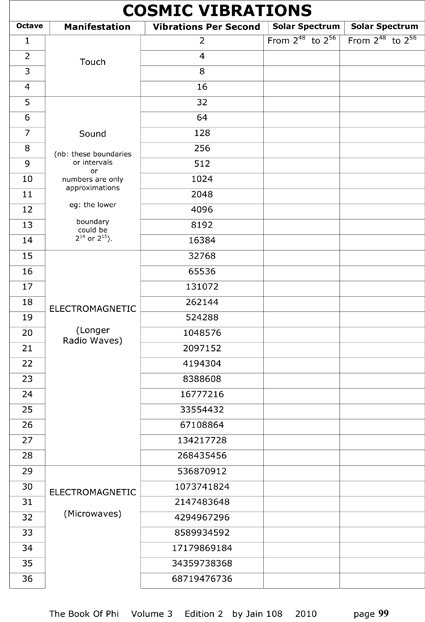 Chart of Cosmic Vibrations based on the Powers of 2 or Doubling Sequence. This chart is a rare find, its source was in a Theosophical House Library… 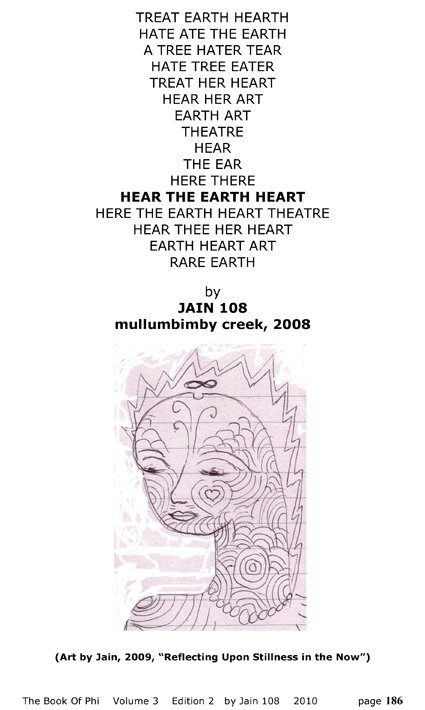 Fascinating Lexigram by Jain, based on rearranging the letters of the word “Earth”

and “Earth Earth” to make sentences like: HEAR THE EARTH HEART. 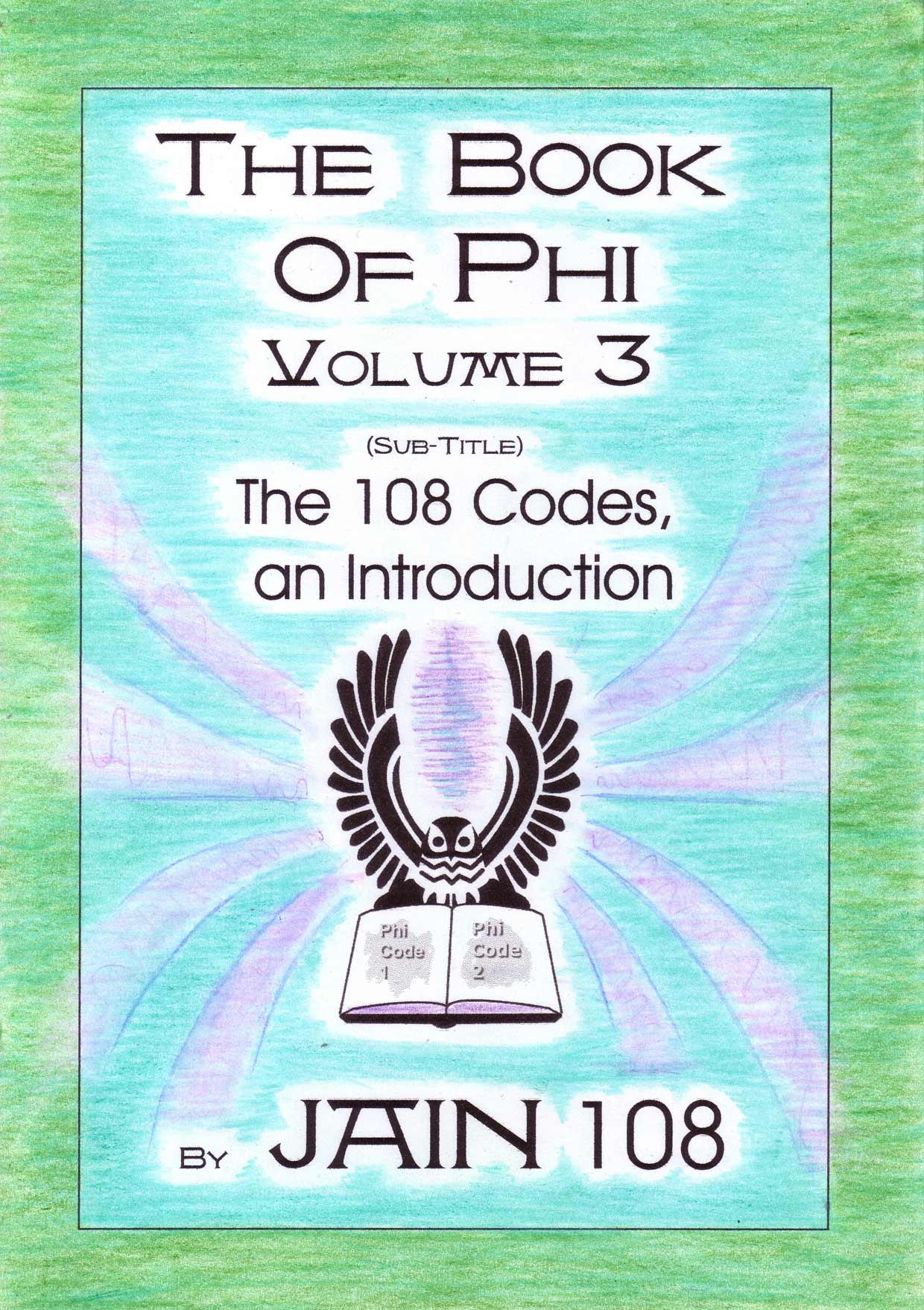 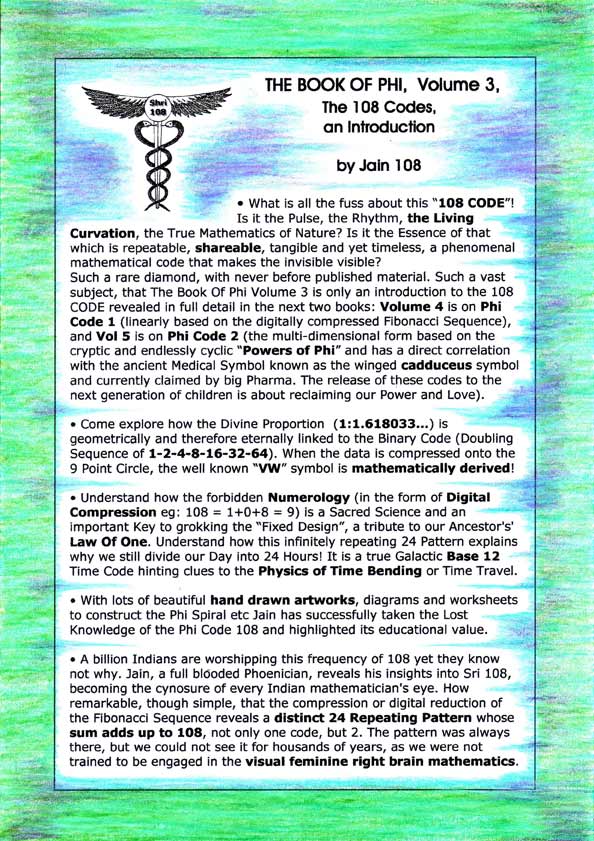 Be the first to review “The BOOK OF PHI, Vol 3: The 108 Codes, an Introduction” Cancel reply