The BOOK OF PHI, Vol 1: The Living Mathematics Of Nature 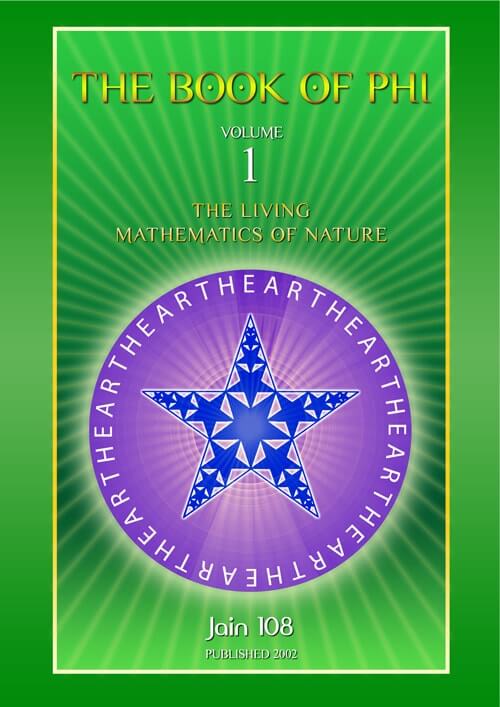 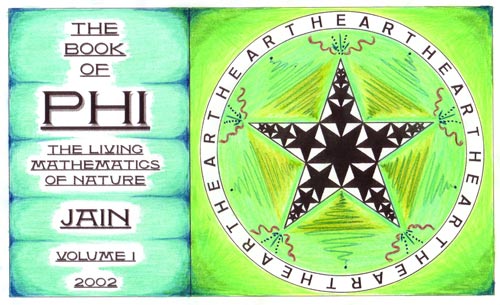 This book contains 176 photocopied pages, is hand-written, highly illustrated, the book is a golden rectangle but fitted or orientated to A4 landscape , and perfect bound.
Self Published in 2002 First Edition
ISBN: 0 9594180 3 2

This book is a collector’s item, it is a summary of 20 years of avid research on this exciting topic.

This Universal Proportion of Living Curvation is also known as: 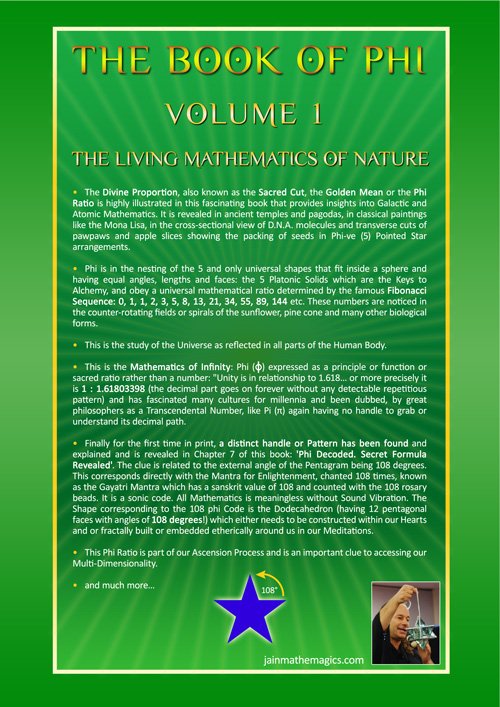 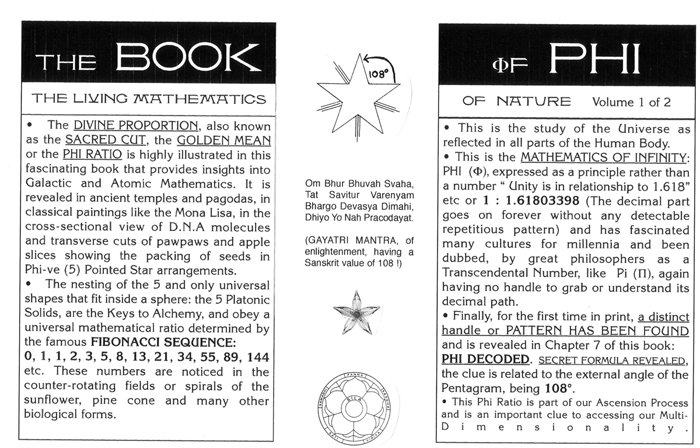 THE BOOK OF PHI – THE LIVING MATHEMATICS OF NATURE

This Phi Ratio is part of our Ascension Process and is an important clue to accessing our Multi-Dimensionality.

IMAGE ON BACK COVER:

(this ancient Mantra, GAYATRI MANTRA, of enlightenment having a Sanskrit value of 108!)
It also has 24 syllables, suggesting that it is closely linked to the infinitely repeating or recursive 24 Pattern hidden in the digitally compressed Fibonacci Sequence.

― In Search of Triangle d’Or

WHAT IS THE GOLDEN SECTION?

― Unity In Trinity, The Three That Are One,

― Genealogy of the Drone Bee

FEATURES OF THE FIBONACCI SEQUENCE

― Voroslev’s Use of Fibonacci Numbers in the Stock Market

― The Digital Sums of the First 24 Reduced Fibonacci Numbers

― The Phi Wave is both a Geometric and Arithmetic Series

― Phi Knows How to Add and Multiply Itself

― The Squaring of the Circle

― Harmonics of a Decagon

― The Temple of Diana

― Construction of the Decagon = Phi Based

― DNA measures 34:20 /Angstroms, in the ratio of the Golden Mean

― Ancient Chinese Puzzle whose solution is a Pentagram

― Musical Proportions and the ”Fifth” in Phi Ratio

― Eliphas Levi’s symbol of the Pentacle with Tetragrammaton

― The Periodic Table of Elements in Phi Spiral

― A Pattern in Phi has been Discovered!

― The First 48 Terms of the Fibonacci Sequence Reduced to Digit Sums, Set 1 and Set 2

― A Palindromic and 12 Digit Cycle Nesting Within the 24 Cycle

― Synopsis 1: The Divine Proportion in the Human Body and Architecture

― Synopsis 2: The Divine Proportion in Nature and the Fibonacci Numbers

― Synopsis 3: The Divine Proportion in the Universe, Atoms and Platonic Solids 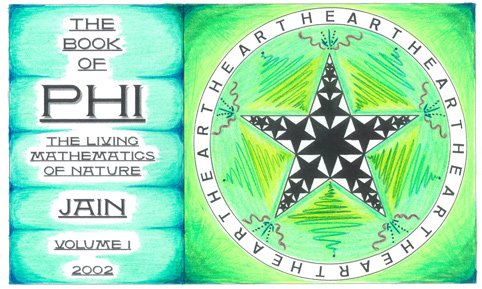 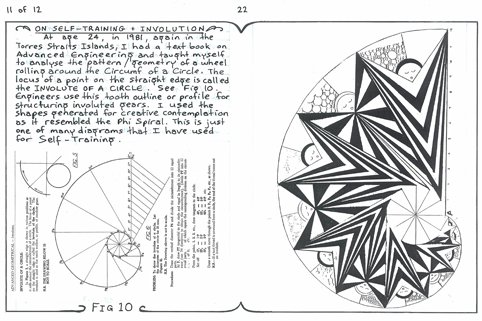 early drawing of Golden Ratio “V-Shaped Beings” known as “Haha-Aha” in a spiral form “Involute or Locus of the Circle” drawn 1981. 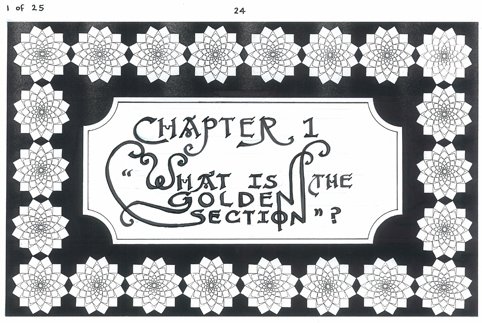 Example of a bordered page, hand-collaged. 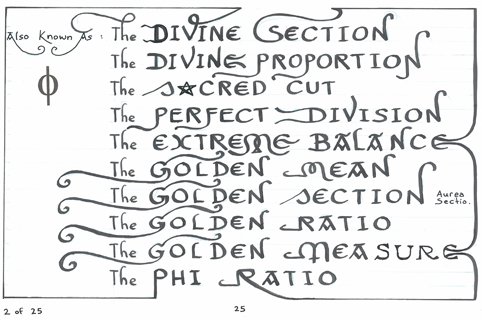 The many titles of the Divine Proportion, hand-calligraphy by Jain 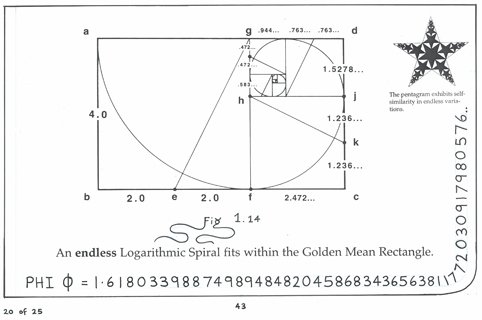 The Phi Ratio written along the border to 50 decimal places 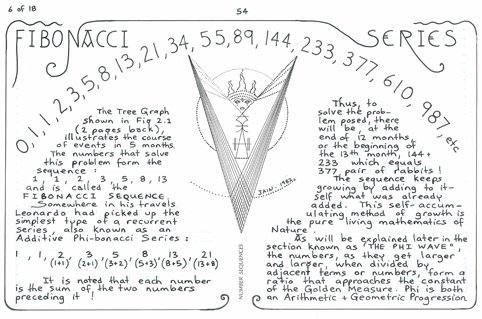 “Haha-Aha” in the central page, Jain’s earliest intuitive caricatured drawings of the Phi Ratio, depicting the series of the Fibonacci Numbers. 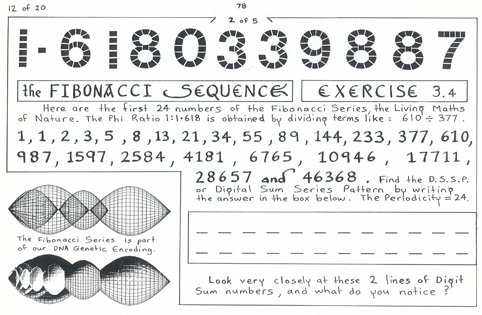 Jain’s 24 Repeating Pattern, showing the first time how it had been written into print form as a worksheet for Students to learn about Digital Compression. Taken from my series of books on JAIN MATHEMAGICS CURRICULUM FOR THE GLOBAL SCHOOL, Book 1: Digital Sums. 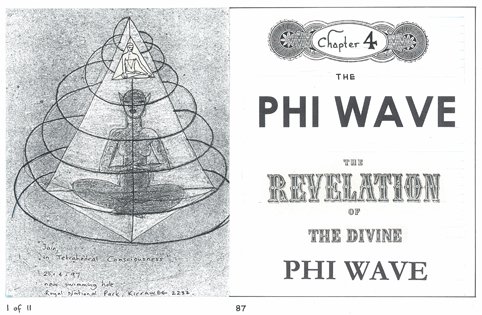 Example of Jain Art, “Alien Being” appearing in a Tetrahedral form. Its a reference to the fact that there are Phi Ratios hidden in the Tetrahedron which most mathematicians are not aware about. Basically, Phi, is in everything and in every symbol. 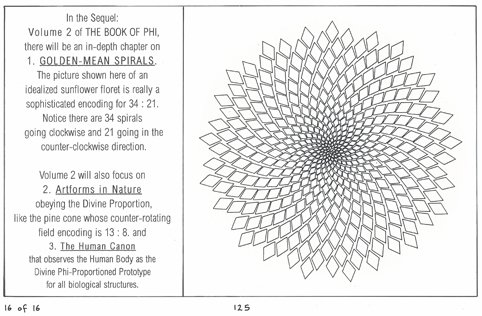 This is my favourite image on Phi, it is a computer generated image showing the phyllotaxis or 21:34 spiral counter-rotating paths of the sunflower floret. In this regard, I consider this image to be highly “PsychoActive” indicating that by merely viewing this, the beholder is downloading or reMembering Ancient Timeless Knowledge hidden in Nature’s Garden. 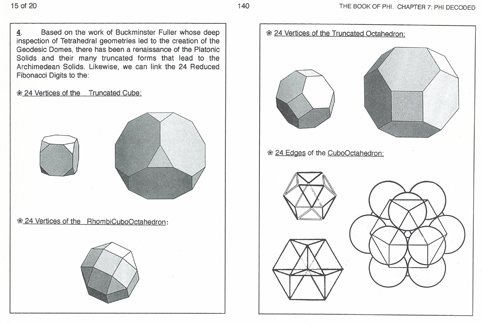 The Cuboctahedron, had 24 edges, and thus relates to the Phi Code of 24 Repeating Numbers that sum 108. It also has 24 triangular vectors that are inside the geometry. It is fractal in the sense that The Inside Is The Same as Outside, as all 24 vectorial lengths are the same unit length as the outer 24 edges; no other shape in the universe has the property. Also, when this wire shape is compressed, it forms the 5 Platonic Solids, the atomic building blocks, expressing its ability to shape-shift in an alchemical dance.

Be the first to review “The BOOK OF PHI, Vol 1: The Living Mathematics Of Nature” Cancel reply