Due to popular demand, the pioneering Vedic Mathematics textbook by Radhika Kiran, has been converted into an ebook for your home study. 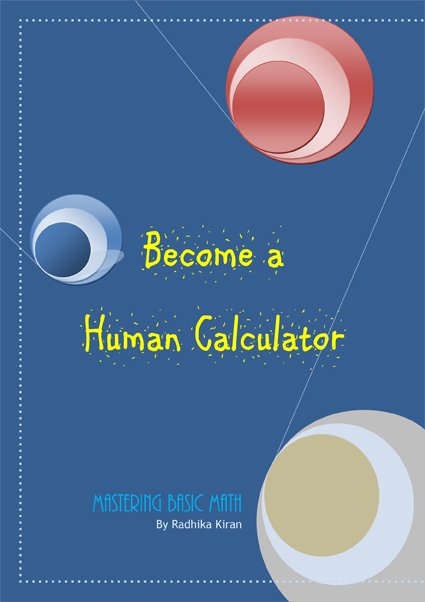 This book is like a Bible on Vedic Mathematics.

At the age of 14 was a child prodigy and was referred to as a “walking computer”. He has selflessly demonstrated the Magic of Pattern Recognition for half his life.

Seemingly complex calculations can be solved extraordinary swiftly. Even though he is considered “A Gift of God”, his teachings are shareable and easy.

This book has jaw-dropping examples that are easily understood and replicable.

There are many activities with answers in the back.

By going through this process, your Memory Power will Increase, and it will definitely boost your Mathematical Confidence.

Radhika Kiran is a math wizard, who has made over 700 public performances including television and radio shows on calculations since February 1993. He has received an Award from the Chief Minister of Andhra Pradesh and has been widely written about in the media. BBC London did an article on Radhika Kiran called “Walking Computer”. His performances have included the All India Mathematics Teachers Associations, Ramanujan Mathematics Academy and the Assam Academy of Mathematics (Guwahati). He is currently working as a software engineer.

He has just won an award from Bits Pilani, an Indian association that honours distinguished youth under the age of 30.

He has received M.Sc. (Hons.) Mathematics, BITS Pilani, and

Radhika Kiran was born and brought up in India. His interest in numbers originated during his childhood and he noticed his potential when he was in class six. Since the tender age of 11, he has stunned even the renowned mathematics experts, with his outstanding and immaculate mathematical skills, thus earning him a title of a ‘mathematical prodigy’. He has given over 700 demonstrations of his ability at prestigious universities, other educational institutions, social gatherings, TV, Radio, etc in India and abroad and earned many titles and awards. Now a software programmer, Radhika Kiran has over the years perfected and refined some techniques of quick calculation. Besides this, this young boy also spares some time for an institution called as ‘Radhika Kiran Educational Academy for Mathematics Improvement‘ where he trains children and young students to do calculations in a faster and more accurate manner, with a view to cultivating a culture of mathematics amongst them.

How does this book help?

What do I learn?

Why should I buy it?

Be the first to review “BECOME A HUMAN CALCULATOR” Cancel reply